Forget NBA. The most attractive and exciting basketball competition in the world is not where stars of this sport are born. It’s a street cage in a New York ghetto or a pickup game in a park that will unearth the biggest basketball gem to be further polished at the glitzy courts of the National Basketball Association.

It’s exactly what this online slot game called Streetball Star is all about. The main scene of the game can easily be found in any neighborhood in New York City where hitting hoops with your homies is a way to escape the clutches of everyday life and live a dream of better future.

There is something rather poetic about streetball basketball, a rough-around-the-edges sport separating the strong from the weak and chiseling professional athletes from the very concrete they come from.

Streetball basketball epitomizes the life struggles people come across throughout the United States – in New York in this particular case – and offer a prize for the most persistent ones.

Streetball Star is a 5-reel slot game with 243 ways to win. It’s an artistic visualization of what a streetball game looks like with B-ball scenes. A player going for a slam dunk, shot and a pass are just some of the symbols you will find on the reels. Joining them are a ball cap, a back rim, the Statue of Liberty and an NYC graffiti sign just to give you a clearer sense of where you are.

Streetball Star’s logo is the game’s Wild which appears either as singleton icons or stacked across a full reel. Needless to say, it is the Wild symbols that bring the action up a notch by replacing all other symbols on the reels for a better chance of landing a payout. 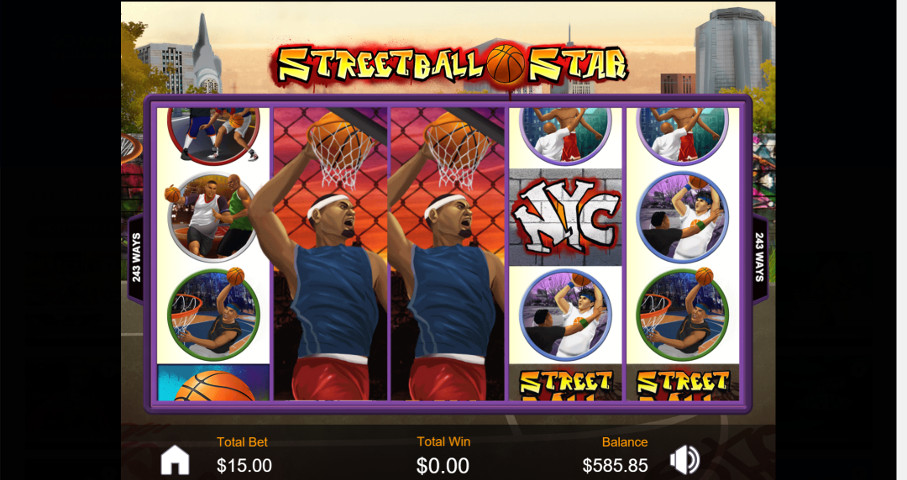 Things are about to get good, real good.

The Streetball Star slot game boasts a uniquely engaging gameplay which latches on a feature universally called cascading reels. It’s all part of the Spray Reels feature when a can of spray paint will paint over all winning icons on any given spin, at the same time removing the winning symbols from the reels with new ones dropping in their place. This mechanic will reward you with a chance to land multiple wins off of a single spin which comes as quite a twist. The Spray Reels feature will keep on going until there are no more wins to be triggered across the 243 betline grid.

Shoot the Hoop for Free Spins and Increasing Multiplier

Bovada casino customers will love the artwork in this sports-themed slot game which adds a special dimension to an already engaging gameplay. 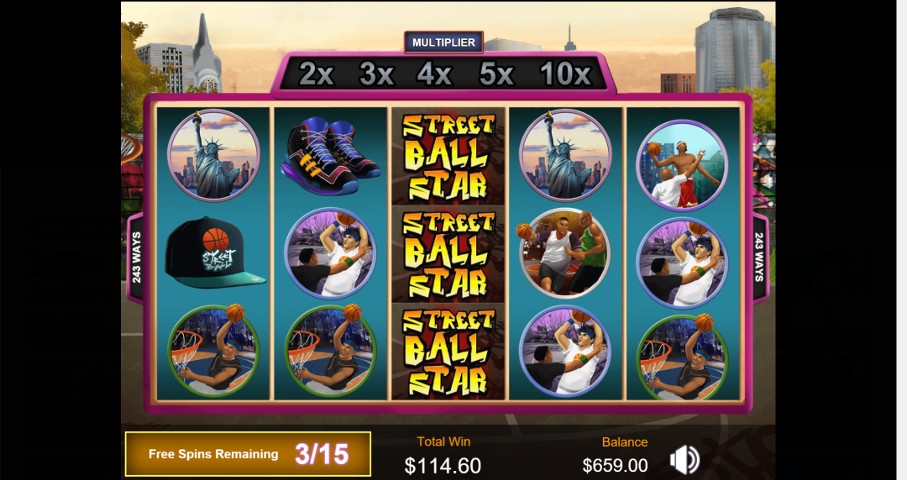 With Wild symbols popping up during the mini game you can watch that multiplier go right up.

The excitement reaches the maximum during the Free Spins feature, however, which gets triggered when players land at least three Scatters on the reels. Before you will be a slam dunk opportunity with no less than 15 complimentary spins of the reels altogether with an increasing multiplier which adds a special value to each spin you go through.

Continuous winning combinations will see multiplier go through 2x, 3x, 4x and 5x all the way towards a whopping 10x whereas as the free spins hit the rim with 10, 15 or 25 depending on the number of triggering Scatters. Watch the wins pile up as you keep splashing those shots behind the three-point line thanks to this remarkable twist to your free spins bonus.

Streetball Star, like many brilliant things in life, is simple as it gets. With a rather straightforward gameplay it combines the artistry of New York ghettos with a wild basketball spirit of the sport’s amateurs who live and breathe through the street court hoops. It embraces players of all types and kinds – with its betting range starting at $0.50 and going all the way up to maximum $100 wager – and diversity is the real beauty of it.