After we had all marched in the new millennium obsessed with Tolkien and The Lord of the Rings, it was difficult the imagine that another epic fantasy saga could ever come close to the frenzy caused by the Fellowship of the Ring adventures. The iconic status of both the book and the movies was rooted deeper with every new silver screen installment.

By 2003, when the last movie saw the light of day, the ruling was official. The craze that followed the franchise could never be repeated. Until approximately one decade later, when George R.R Martin proved us all wrong.

Although epic fantasy novels have always had a firm fan-base, it was the silver screen that de-stigmatized the genre and introduced it to the mainstream audience. Suddenly, the Dungeons and Dragons nerds were no longer the target demographics.

People from all walks of life started to appreciate the work of Patricia C. Wrede, Dave Duncan, Robin McKinley, and others. The popularity of the genre was quick to expand onto other entertainment-related areas, and Betsoft, among other software manufacturers, was ready to exploit the new trend.

In July 2017, the developer launched Fire & Steel slot which spread through BetSoft powered casinos – such as Betonline – like a forest fire. Featuring graphics worthy of the theme, Fire & Steel is a 20-payline, mobile compatible slot that pays both ways and produces 96.5% RTP on a long-term gameplay session.

A Song of Dice and Fire

The embarrassing pun above was made for a reason. The dice, in this case, refers to the Gamble Feature that Fire & Steel slot incorporates, allowing the player to increase the excitement level and possibly double the payout. After every winning spin, the players can select the Double Up option and gamble with their winnings. If the risk seems excessive, you can choose to stake only 50% of the total amount and flip a coin for as long as you are in the winning streak.

The symbols with the highest payout value are the Crown, and the two Coats of Arm, one depicting the two purple birds and the other one embroidered with a pair of yellow wings. The Book, Golden Goblet, Helmet, and the Knife carry a medium payout value, while the precious stones are the low-paying icons. All Wild icons have the same value, and the payout that they can produce will depend on the number of the relevant symbols within the combination. A string of 5 symbols will produce a payout of 500 coins.

The featuring characters of this “war for the supremacy” saga are the Swordsman and the Shield Maiden. Each of the two fierce warriors has the same “super” power (equality in its finest form). The male character can release a vertical beam which turns all affected icons into Wilds and the female character can do the same, transforming the symbols that are lined up horizontally. 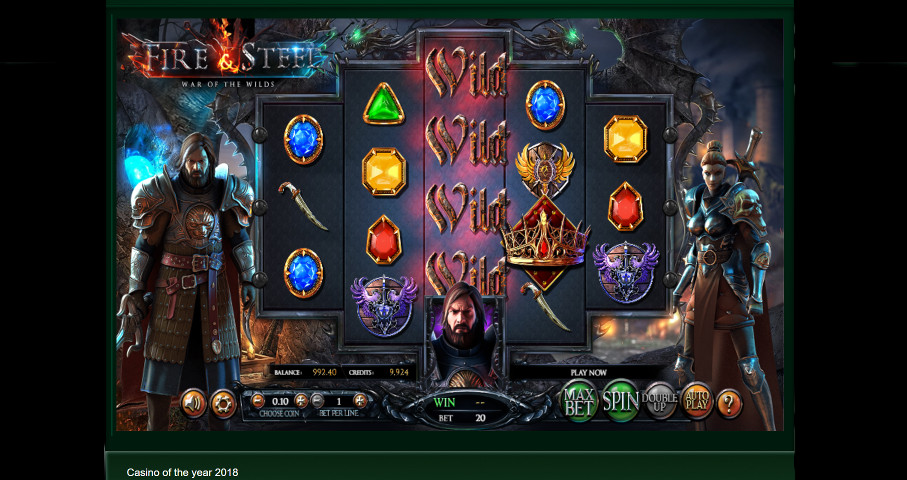 The Battle of Beams!

If this is not impressive enough for you, wait until the Swordsman and Shield Maiden meet and intersect their beams. When that happens, 10 Free Spins will be initiated and all the symbols found on the intersection of the beams will transform into Wilds and remain locked on their places till the bonus rounds expire. Additional Free Spins can be triggered during the bonus games, featuring more sticky Wilds.

Thanks to the adjustable paylines and the coin size that ranges from $0.01 to $1.00, Fire & Steel will be suitable for different profiles of players, including those who must be mindful of their budget. The theme and the elaborate visuals will, without a doubt, attract plenty of players, however, it has to be noted that the bonus features are not truly meeting the expectations. The ultimate battle between the Swordsman and the Shield Maiden is a good start, but the end result (Free Spins) is a bit anticlimactic.