Arrr, mateys, do ye need some treasure by any chance? Dive into the spooky and super fun adventure that Ghost Ship by RTG has prepared for you. The treasure chest you are looking for is right there, in the captain’s cabin and you’ll need to team up with the likes of Jack Sparrow to fetch it. You don’t need to wear a three-cornered hat and an eye patch, but you are required to join a reputable RTG casino and load the Ghost Ship video slot.

Remember when Jack Sparrow and his former pirate allies were the undead in Pirates of the Caribbean: The Curse of the Black Pearl? Ghost Ship slot features a similar story line and it’s obvious the developer was inspired by the 2003 blockbuster. Who can blame RTG – after all, Pirates of the Caribbean went on to become one of the biggest and most popular movie franchises that ever made it to the big screen.

What started as a Disney’s theme park ride became a series of swashbuckler films (five so far) which follow the adventures of ‘Captain’ Jack Sparrow (played marvelously by Johnny Depp), Will Turner (played by Orlando Bloom) and Elizabeth Swann (played by Keira Knightley). As much as Pirates of the Caribbean are mindless entertainment, they also depict pirates as a representation of freedom from the ruling powers.

If that’s not inspirational for a great video slot, then we don’t know what is! Apparently, you don’t need to be alive, technically, to be a good pirate. All aboard the Flying Dutchman!

Some spook is to be expected below the deep blue sea and aboard the legendary Flying Dutchman. Have no fear as your pirate mateys will help you capture the Ghost Captain and get to the booty.

First of all, take a good look around. The game is played across 3 rows and 5 reels. The background is dark and eerie, much like the soundtrack. Steady on the sails and you’ll reach the control panel where you will adjust the course, aka your bet size. The Max Bet tab is there to make it easier for players who aren’t afraid of some undead pirate captain; it maximizes the bet instantly.

The Autoplay, on the other hand, frees the player from having to click Spin over and over again. The number of active playing lines goes from 1 to 25. The maximum bet per spin is $125, and the minimum is just $0.01, making Ghost Ship a very affordable game.

Other than typical playing card symbols (adorned with seagrass), the slot introduces symbols such as treasure chests overflowing with gold, alarm bells, mermaid statues and cannons. You know. The usual. The macabre Ghost Captain is the Wild symbol. He has the power to replace all other symbols and fill your pockets with loots from your wildest pirate fantasies.

Also, keep your good eye on the Ghost Ship – it is the Scatter symbol and its role in the bonus action is essential. Both the Ghost captain and the Ghost Ship can appear in stacks and increase your winning potential.

Shiver Me Timbers, There’s A Progressive Jackpot to Be Won 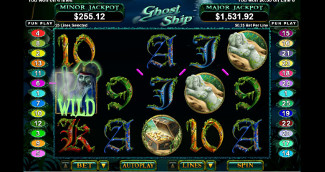 The Free Spins round is the most lucrative one in the game. It takes 3 or more Scatter Ghost Ships to obtain in order to initiate free play. Each Ghost Ship or Wild Ghost Captain symbol in view will award 2 free games. If you manage to land 4 Scatters in the initiating spin, all wins acquired during free play will be doubled. What is more, all your free games wins can be multiplied by 10 if you succeed in getting 5 Ghost Ships stuck on the reels in the starting spin.

The belief ‘dead man tell no tales’ has no appliance here, because the more Ghost Captains you encounter the bigger the odds of winning the major payout, the random progressive jackpot. Imagine landing one of the 2 progressive jackpots on offer, putting up the Jolly Roger and sailing away into eternity!

Give no quarter to any mutineers and traitorous shipmates, because the longer you persevere aboard the Flying Dutchman the more plunder you’ll keep for yourself. The maximum win, if we don’t count the progressives, is 50,000 coins. The variance is medium, which should help you keep a steady course towards victory.