Is baccarat a game of skill? You’d be forgiven for thinking so, since it is so often called one.

That’s right. If you are under the impression that baccarat is a game where skill comes into play, I am writing this article to lay your misconception to rest.

Baccarat is a game of complete chance. The only strategy available to you is to make the wager with the lowest house edge. 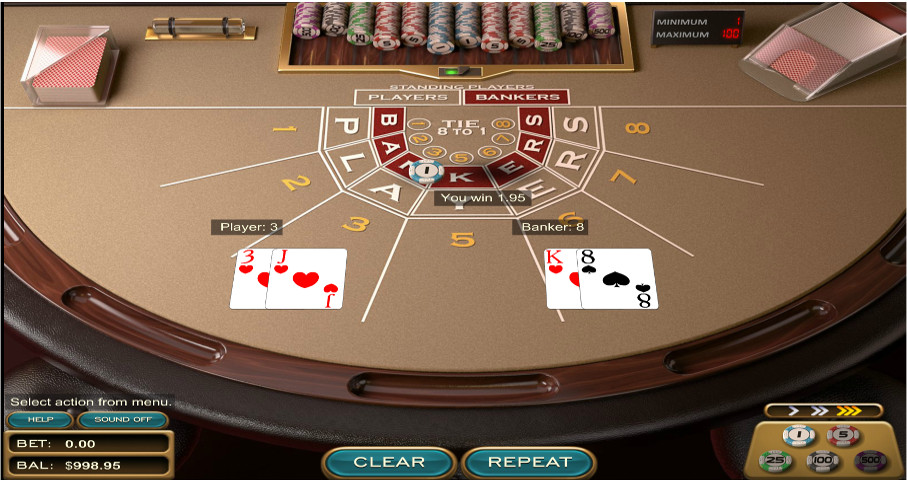 Baccarat being played at the casino at MyBookie. Here, you can play for as little as a dollar a hand!

Why Do People Believe Baccarat Is a Game of Skill?

The Las Vegas Sun quotes The New York Times as having said, “Baccarat is equal parts skill and chance.” That was in 2012.

Wow. Well, they couldn’t have gotten that more wrong.

But most people trust a source as established as The New York Times. So, naturally, when the Times tells them that baccarat is equal parts skill and chance, they believe exactly that. And if they see something else say otherwise, they probably assumed that that other source is incorrect.

Not that I’m suggesting that The New York Times is solely responsible for this misunderstanding about baccarat, but it is a pretty glaring example of a reputable source been totally incorrect.

Here are some of my additional thoughts about why so many people might be under the impression that baccarat is a game that at least partly involves the application of skill:

Maybe it has to do with the elaborate presentation of baccarat tables in the past. Another theory is that the roped off tables and fancy attire and the presence of high rollers at baccarat tables in decades past could give an impression that skill is a factor. Like the association with James Bond, they conferred an “elite” status on the game. Although high rollers had the luck to get rich, luck itself is rather egalitarian and indifferent, hardly “elite.” But we do often associate elitism with, say, elite skill. So, maybe there is a tendency to assume that the tables are roped off so that those elite few with the skill to win at baccarat can play in their own exclusive zone.

A low house edge is sometimes confused with the availability of skill to determine outcomes. Depending on what type of bets you place, the house edge for baccarat can be low. That doesn’t have anything to do with whether it is a game of skill or chance. Nevertheless, perhaps because this makes it one of the “smarter” bets in the casino, there is a tendency to assume automatically that it also is a game where skill is involved.

The mistake is self-perpetuating because people keep making it and passing it on. However the myth that baccarat is a game of skill began, surely the main reason that it continues to persist is because people keep saying that it is one. Again, the New York Times is not the only publication to make this mistake.

Check out this article, “Baccarat FAQ” to dig a little deeper into the “how” of Baccarat.

Baccarat Is More Accurately Perceived in the East 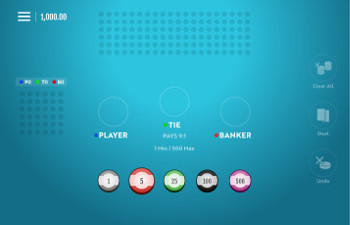 This is Baccarat being played over at Bovada where they’ll even let you play for free and test drive it!

Interestingly, geography determines a lot when it comes to the pervasiveness of the misapprehension that baccarat is a game of skill.

Gamblers who are in the US or Europe seem like they are most likely to mistake baccarat for being a game of skill.

Gamblers who live in Asian countries, on the other hand, do not seem prone to this belief.

Former gaming executive Bill Zender talks about this in the previously linked article, saying, “The Asians love the characteristics of the game. To them it’s a pure gambling game. Once the cards have been shuffled, cut and placed into the shoe, the cards speak for themselves.”

Malcolm Rutherford, former Senior Manager of Corporate Investigations at Galaxy Entertainment Group writes that Asian gamblers, “believe in the powers of Fate and Fortune to such an extent that gambling culturally and psychologically appeals to them as the ultimate arbiter of these concepts. Assuming that this is true then for something to act most naturally in these areas it should, most perfectly, be a game lacking any other determinants…such as skill, which can alter the Fate/Fortune given outcome.”

So, he explains, games like baccarat which are based on pure luck, “can be considered excellent pointers on whether the individual playing them is favored by Fortune…or not.”

So, interestingly, the theme of elitism does come into play here. Gambling, and games like baccarat in particular, as seen as spiritual “proving grounds” of sorts, where one offers oneself up for judgement by forces unseen.

The best places to play Baccarat online for real money? Bovada, MyBookie, and BetOnline.
Take a look at all of the sites we trust and use ourselves to see who has the best offers going on right now!

Asian Gamblers Understand Baccarat is Based on Luck, But Perhaps Misunderstand Luck Itself

Of course, luck, as I mentioned, is rather egalitarian by nature.

Gamblers in Asia who flock to baccarat tables at casinos in Macau know, (mostly) that there is nothing they can do personally to influence the outcome of the game.

But there are a couple of flaws in the logic which drives them to find the game compelling.

First of all, they believe that what they are can impact the outcome of a game.

Again, as Rutherford explained, gamblers playing baccarat in Asia want to find out if they have the favor of Fortune, and baccarat is a way to test that. So, even if they do not think any deed they can do at the table makes a difference, they believe that their own nature makes a difference. Either they are worthy, or they are unworthy. They might even assume their overall conduct away from the table will have an impact.

Secondly, they do sometimes engage in superstitious rituals. This can include bending cards and even poking holes through them.

Both of the beliefs above imply that there is an underlying assumption that “luck” is not truly random.

But if luck is seen as not truly random, baccarat is still being perceived (in a way) as a game of skill.

But the skill has nothing to do with probabilities or card counting—it has to do with appealing to an unseen force of nature.

Luck is Random. So is Baccarat.

Here is a definition I found of the concept of luck:

“Success or failure resulting from chance, not from one’s individual actions.”

There are other vaguer definitions but this one emphasizes the random quality of luck.

Your own actions have nothing to do with lucky or unlucky outcomes.

Here is another useful definition:

I don’t know if we can assert that there is a “force” involved—but let’s say you do believe that.

If so, by definition, that force (luck) has no purpose or motivations in anything it does. There is no “why” you win or lose based on it. Thus, it is random.

The concept of Fortune which Rutherford talks about may be different than that, I don’t know. If a gambler believes that he has Fortune’s favor for a reason, then he is appealing to a deity (or something in that area) rather than a random force to which no appeal is possible.

Obviously, I’m not here to try and tell any gambler what to believe or not believe concerning spiritual forces.

My point is simply this: luck is random, and not a spiritual force.

So, if you don’t believe that Fortune or the gods are forcing the hand of chance, then you can acknowledge that baccarat is a game which can only have random outcomes.

If you do believe that spiritual forces may be on your side, more power to you, keep blowing on those cards. Maybe the powers you believe in will be on your side.

The One Useful “Strategy” for Baccarat: Always Bet on the Banker 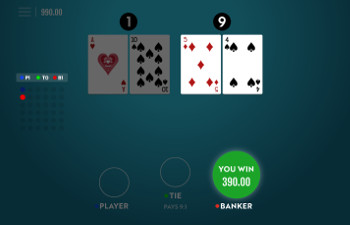 Here you see a win with the bet having been placed on “Banker”, the best bet you can make!

As I mentioned, you cannot influence the outcome of baccarat, since it is random, but you can at least pick the best bet every time. You can also stay far away from the worst one.

The best bet is the one with the lowest house edge. Here are the main bet types you can place in baccarat.

There are sometimes side bets available to make as well. Clearly, you want to stay away from the tie bet, because the house edge is ridiculous, whereas it is much more reasonable for the player bet and the banker bet. As it is lowest for the banker bet, that is always the logical one took place.

So, that gives you the only useful strategy to follow when playing baccarat, which is to place the banker bet every single time.

The monotonous nature of this strategy perhaps also plays into why gamblers often engage in superstitious behaviors while playing the game simply so that they have something else to do.

Nonetheless, the simplicity of baccarat makes it an appealing game even for inexperienced players, while the low house edge (it is one of the best you’ll find for any casino game) keeps advanced players coming back. Plus, the repetitious nature of the game can create a hypnotic, relaxing state of flow.

Western gamblers are a bit slow on the uptake still when it come to discovering baccarat (maybe it is those mental images of roped off tables so firmly fixed in mind), but as Macau’s sensation spreads, player around the world are sure to discover the appeal of baccarat.

Conclusion: Baccarat Is a Game of Random Outcomes

So, we have now discussed extensively why so many people think that baccarat involves skill. We also have discussed different cultural perceptions of baccarat between East and West, and how different individuals may even have varied perceptions of what “luck” itself is.

But you now know that baccarat is a game of pure luck with no skill, and that “luck” means that the outcomes of the game are random.

Since you cannot influence the outcomes, you may as well continue to bet on the banker to keep the house edge to a minimum. Beyond that, just kick back and enjoy experience. Need recommendations for where to bet on baccarat online? Check out our reviews.

And then there is also…