Tri Card is extremely popular among beginners, and veterans often recommend this variant to those who are yet to master the fine art of poker. Thanks to the simplified structure, the game provides comfortable gameplay for the players who are still in the learning curve, while more experienced poker aficionados will enjoy the dynamics of the fast pace sessions. According to some sources, the game bears a strong resemblance to Teen Patti (aka Indian Poker) and British Brag, however, the official developer of Tri Card is a UK native Derek Webb who introduced it to the USA market in the 90s. 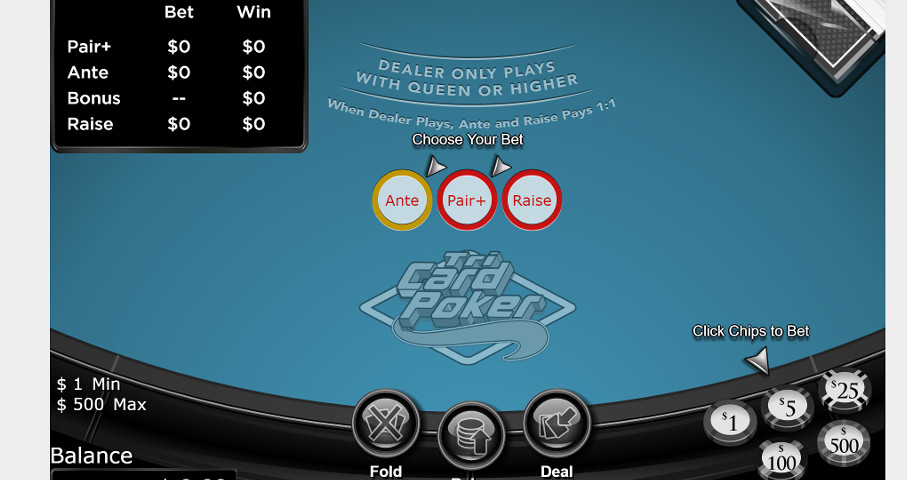 Take a look at this image. This is the basic “Tri-Card Poker” table as seen at Bovada. Now take a look down at the next image…

In Tri Card poker, the players’ rival is the house and the session starts with the Ante bet. Pair Plus side bet can be either mandatory or optional while wagering on the 6-Card Bonus is entirely up to the player. The session is initiated when all bets are submitted, at which point the dealer will deal three cards for the player and another 3 for the house (facing down).

The players will then have two options:

If you choose to continue, the round can end in one of the following ways:

Side bets are settled independently from the Ante bet, according to the separate paytables. 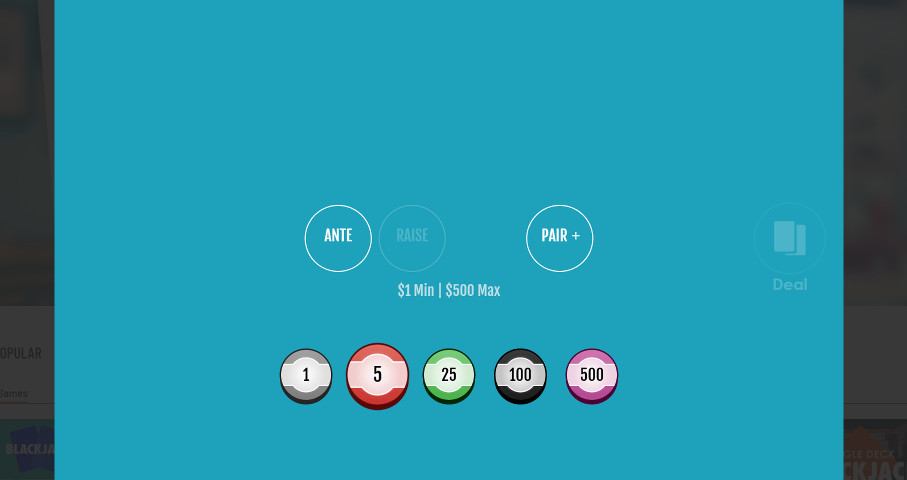 This is the same game, only at CafeCasino.
While the same game play, one must decide if they like the visually ornate design or the clean, minimalist layout.

Hand Ranking and the Payout Odds

Straight hand outranks the Flush in Tri Card poker, due to the fact that Flush has a higher frequency rate. Both Ante and Play bet produce even pay, while Ante Bonus is a payout rate applied to the Ante bets that result in Straight Flush or a higher ranked hand. Detailed representation of the payouts can be found in the tables below:

Pair Plus, Rank and Pay Table:

We mentioned CafeCasino just above. Did you know they are currently offering a 500% Welcome bonus AND a $6000 bitcoin bonus?
Also, ever wonder just how Online Casino VIP programs work? We dug into it!
6-Card Bonus bets are paid as follows:

The house edge (when the optimal strategy is applied) is 3.3% for Ante and Play bets or 2.3% for Pair Plus bets. Here are some of the main principles of the basic Tri Card Poker strategy which will help you reduce the edge:

Tri Card Poker falls along with some other types of poker as being some of the easiest games at the casino, but also some of the most fun. Yet, throw in the optional 6 card bonus and you’ve got a great game with a nice learning curve for the newer player that is still learning the hand ranks. This guide should get you on your way to playing along and hopefully bringing in all the winnings!

Need More to Read? Got You Covered