What is Poker 3 Heads Up Hold’em?

Poker 3 is Betsoft’s version of Heads Up Hold’em, a poker variant that has gained a lot of popularity in the past few years. In terms of structure, Heads Up is extremely similar to Ultimate Texas Hold’em, in which the players challenge the dealer instead of each other.

Heads Up follows the same rules, reducing the entire game of poker to just two opposing players, usually as a result of a larger session during which the other players have been gradually eliminated. Betsoft’s Poker 3 Heads Up Hold’em is played against the virtual dealer from the get-go, same as Casino Hold’em or Caribbean Stud. 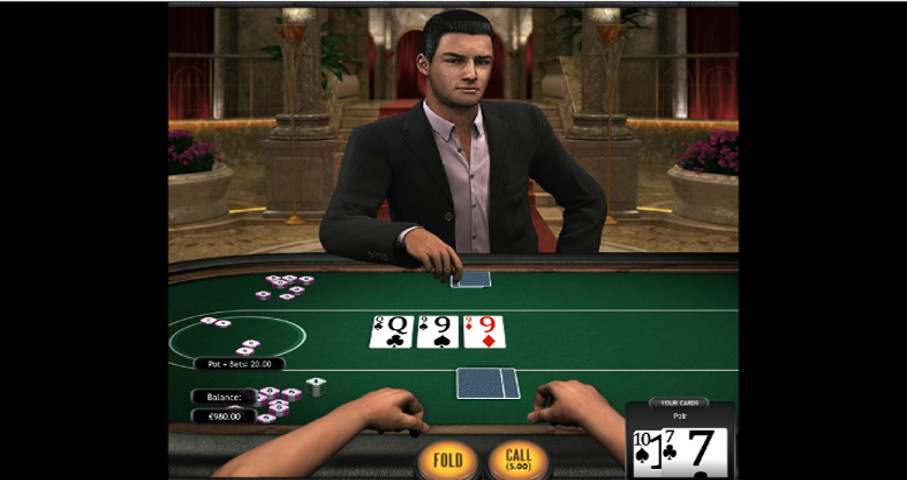 You can find Poker 3 Heads Up Hold’em at many casinos. This is how it looks over at GTBets.

Placed against a 3D background, Betsoft Poker 3 Heads Up Hold’em replicates the settings of an actual casino and enables the users to choose both their opponent and the stake size before initiating the session. Once the technicalities are out of the way, the players confirm their selection by clicking on the Deal command, placing the Ante bet at the same time.

The player’s hand is displayed at the bottom of the game screen (to the right) while the dealer’s cards will be facing down till the end of the session. After the initial cards have been dealt, the player is presented with two options:

If one decides to raise the bet, three more cards will be placed on the table (facing up). This is the so-called Flop which the players can combine with the initial two cards. With additional cards on their disposal, the players will once again get to choose between folding the hand or raising the bet. Placing a new stake will add an extra community card (Turn) and this time it will cost extra to remain in the game – the Call bet will now be doubled.

When the River (the fifth and final card) is added to the community pile, the players have one final chance to fold or raise. At that point, the cards are being revealed and the player with the higher-ranking hand wins the bet.

We’ve got a few places we like to play table games. One of our favorites? BetOnline Sportsbook and Casino. If you’re new to them, they’ll give you a 50% Welcome Bonus if you use the code, “BOL1000“!
Also, why not learn how to play Red Dog while you’re here?!

For the sake of clarity, let us break the entire session into the following stages:

Stage 1 Player starts the round by submitting the Ante and the cards are being dealt. The players now have two choices:

Stage 2 The first three community cards are placed on the table and the players can once again increase the stake or fold. Unless they decide to fold, a new community card will be added to the pile.

Stage 3 Call bet is doubled, and the fifth community card is drawn.
Stage 4 Players have one final chance to forfeit the round, otherwise, the stakes are raised again, and the bets settled.

The stakes can be changed before every new session. 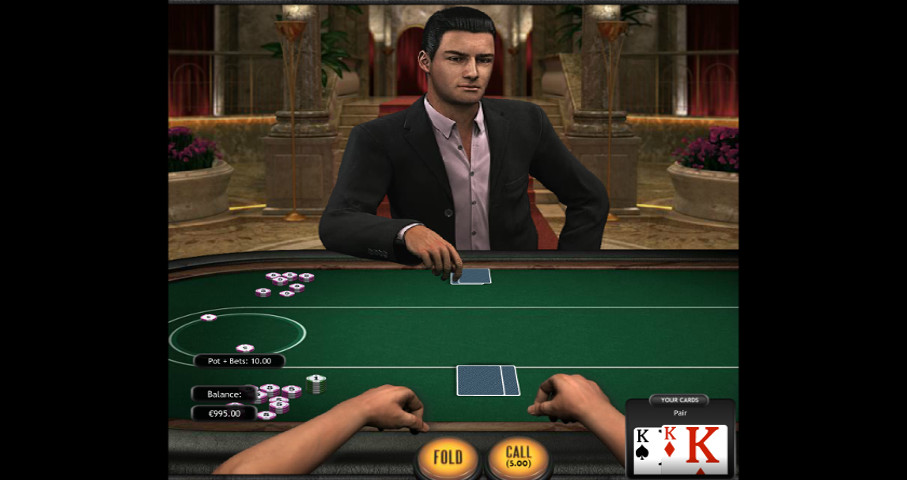 Pair of Kings? You’re damn right I want to call. Let’s see what you’ve got, Dealer.

Heads Up Hold’em is settled according to the standard paytable, which corresponds to the one applied to Ultimate Texas Hold’em:

The hands are ranked as follows (top to bottom): 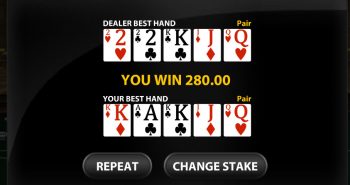 If nobody folds, you’ll get to see exactly what hand both you and the dealer had.

The basic poker strategy prompts the players to call whenever possible, especially if they hold:

One should only fold on low cards which cannot form a pair or if their cards do not have the same suit as the community cards.

Beginners are also advised to start with lower stakes, at least until they master the strategy and feel confident enough to press their bets.

…and with this you should be good to go and try out some Poker 3 Heads Up Hold’em for yourself! This is a simple one here with not a lot of hand-combinations to remember as you head out to the casino of your choice to clean up!

If you’ve made it all the way down here but you’re still not sure, well why not take a look at –