Those eyes await you as you first enter. You know that guy’s looking for a fight.

Let’s go ahead and start with the basic appearance. Those of you sitting at home with an Xbox, a PlayStation or a Nintendo can fire it up and take a look at their respective online stores and look under the “Independents” section and see exactly what you would be in getting yourself into.

If following the above you’re looking at a whole bunch of games that just aren’t AAA titles but at a cost of 2-10 dollars, can be a lot of fun. That’s the kind of game we’re getting into here, but with one big difference – this one pays you money!

Now, there’s a lot going on here, so bear with me here, I’m going to try to hit it all up! 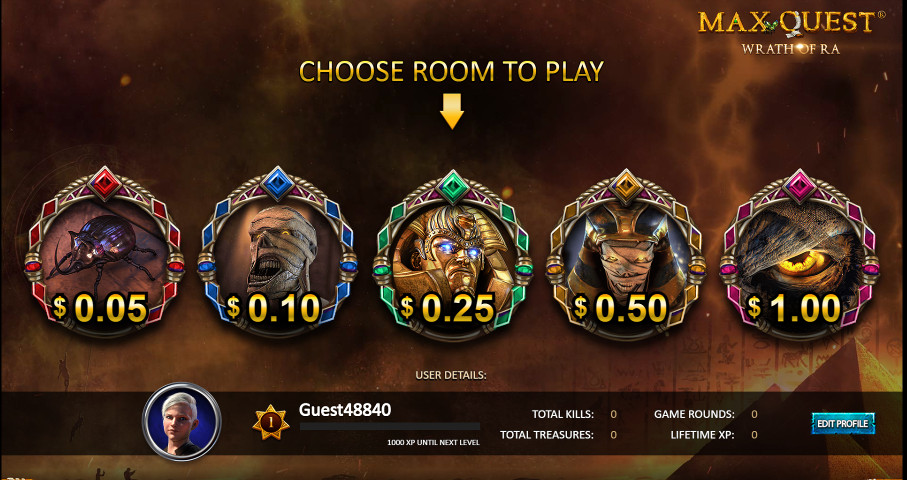 Your “room choice”. Read below, this is an important choice.

Getting Ready to Play

First things first, you’ve got to decide if you’re playing for fun or real money. Big Spin will let you play almost anything for free to try it out first, and the Wrath of Ra is no exception here. 2 things to keep in mind however…

Once you do that, the game will have you choose which room you’d like to play in (see image above), and another way this could be worded is, “How Much Would You Like Each Bullet to Cost You?”
This may sound scary at first, but it’s really not.

Yes, you will be shooting a lot of bullets and any amount of money can add up fast, but Big Spin will make sure that even if you don’t win big, you’ll still be able to go for a while, (they are still a casino after all!) With all of the screenshots you are about to see, I went with the “.50 cent Mummy-Pharoah Guy” for no reason other than I liked the way he looked.

From this screen, you are able to also “Edit Profile”. You can change your appearance from 5 pre-made characters, change the background color of the said icon, and you can change the frame surrounding it. While it seems this shouldn’t matter much, it might in the long run. Keep reading for more info! 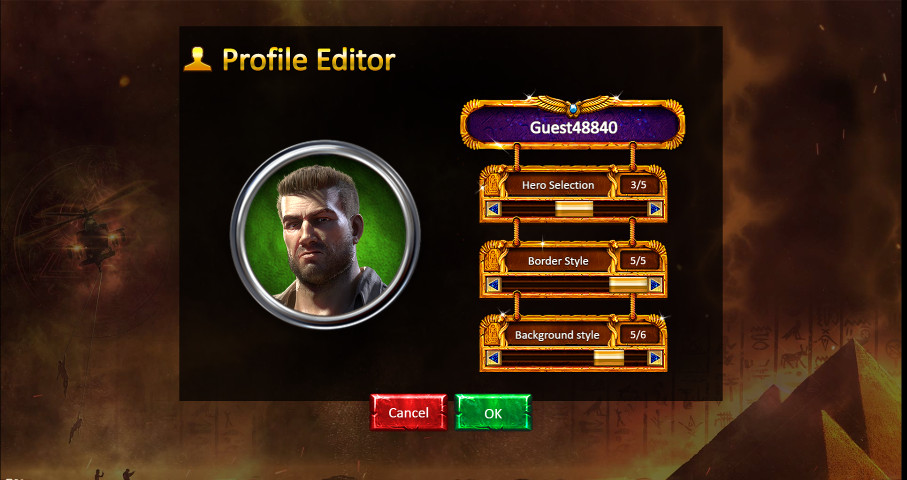 I went with this guy because he looks just like me. That picture says, “Women want me, fish fear me”.
Yup. That’s me.

After all of that, it’s time to start playing!

Now the actual fun can start!

You are thrown into a room with many different enemies running around. While they cannot harm you, you still want to go ahead and start shooting them! Wait, maybe you’re the bad guy!

As stated above, every bullet you shoot will cost you X amount of money. That is to say, each shot fired is a bet.

There is a guarantee that every bullet will hit an enemy! That kicks ass, although there is not a guarantee the enemy will die. Using the same RNG you find in slots and other chance games, it seems as though it takes anywhere from 1-10ish hits to down an enemy.

If an enemy is destroyed before a bullet hits it, that bullet will ricochet off of walls until it hits a new enemy.

Now, with each of these shots fired, there is a random chance of killing the enemy and said enemy will drop random loot, ie; your money!. 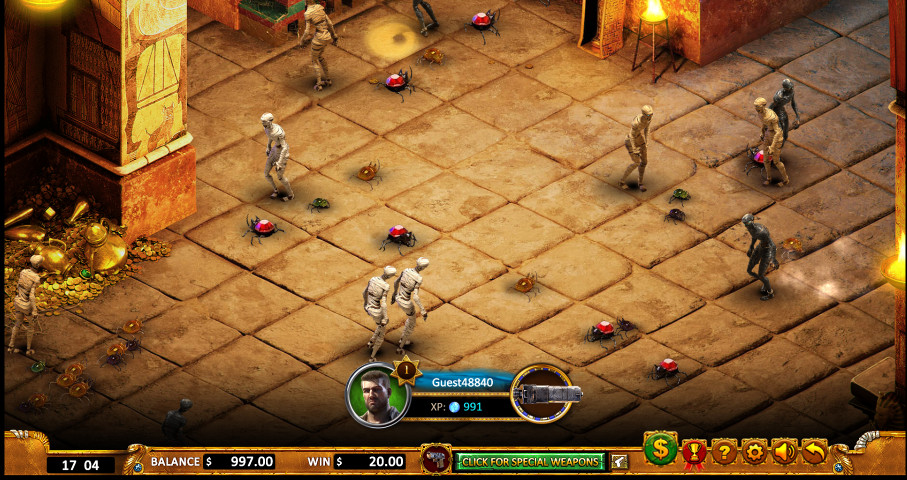 There were virtually always groups of scarabs and little mummies running around. I would ignore the bugs and concentrate on the higher paying mummies when I was playing. You may have a completely different strategy.

Treasure Chests of Death For Sale

During this play time in the middle of your game, if you were to look toward the bottom of your screen you would see a green banner button labeled “Click For Special Weapons”. Clicking this button will bring out the real firepower as you are given the option to buy one of three treasure chests, each of a different monetary value with the hope of getting a temporary, but a bigger and better weapon.

The weapon you receive will be random, along with a random amount of uses the special weapon has. The possible weapons you can receive are

with each of them doing more damage as that list goes down. I couldn’t seem to get myself a Plasma Rifle unless I bought the most expensive chest!

It should be noted, and this is a great thing, any shot fired from a Special Weapon do not cost you any money. You pick up a shotgun, or a laser gun, whatever, don’t be shy! Fire away!

Naturally, there are some bigger, tougher enemies that are going to take more bullets to kill but come with the chance of dropping higher loot! Sometimes you’ll get lucky and a smaller enemy may drop a good amount, although I personally just kept going for the bigger enemies, ignoring the smaller ones for the most part.

The paytable for killing these enemies varies greatly depending on the type killed. The smaller ones are worth 2 and 50 times your initial bet, the larger “normal” enemies are worth 10 and 200 times the bet.

Every once in a while, one of your fallen enemies will rise back up, but this time covered in flames and much harder to put down a second time. However, their payout becomes between 50 and 5000 times the initial bet! 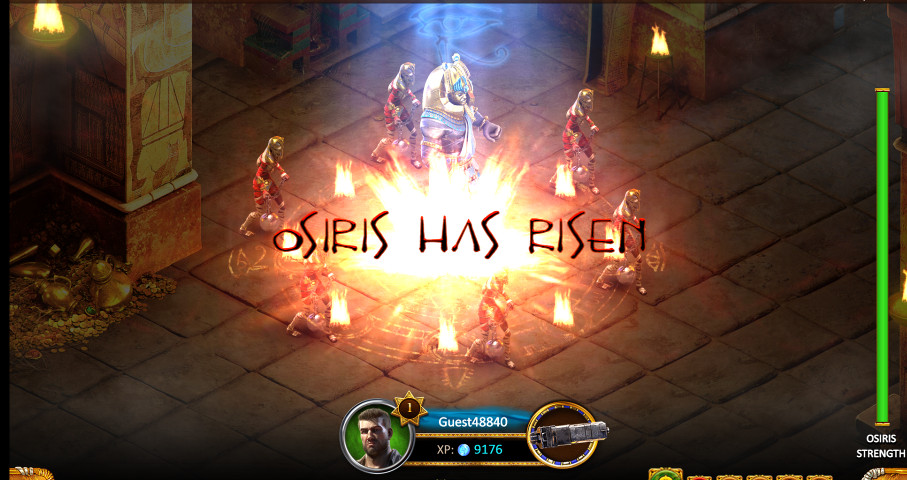 Eventually, the round will end and all remaining enemies will walk off screen. At random rounds of play, at the end one of 3 vengeful Gods will appear and start walking around. This God is going to be tough to kill, but also be very worth the work and reward as he will drop more and more money in bigger and bigger piles as he takes damage.

According the “Help Screen” on the BigSpin website, “all players in the room work together to take dowm this God,” although during my time playing, I never saw another player, it was always me, going solo. I do not know if that’s because I was playing the free version or not.

Every shot fired has a chance of doing damage to the God, a chance of dropping loot even if he does not die, and using any Special Weapon will drop better loot. 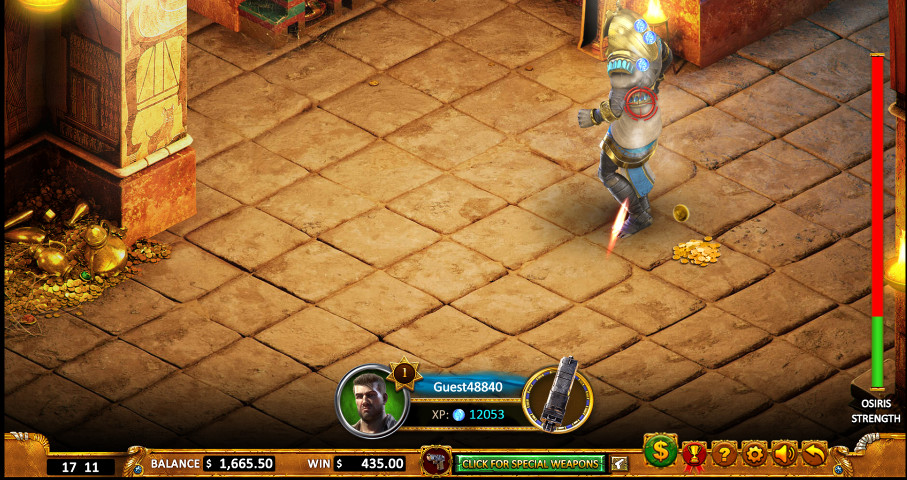 As seen on this screen, one shot in particular made this God poop out $435 dollars. Not bad at all for a .50 cent bullet!

XP, Leaderboards, and Quests! Oh My!

Wrath of Ra is also freakin’ awesome as it will also keep track of your progress via earned XP, (“Experience Points” for the non-gamer), that you get for killing these enemies and Gods. This XP goes toward a daily leaderboard where you can compare your stats to those of other players.

Those placing in the top places on the daily leaderboard will find themselves gifted with treasure chests containing real money prizes and special weapons to use in other games and rounds of Wrath of Ra.

As far as quests go, at any time you can be tasked with up to 25 quests to complete. These are randomly generated and grant you with extra XP upon completion that help push you up on the aforementioned leaderboard.

A Note – for the XP, leaderboards, quests, and tracked progress to take effect, you must be playing for the real money option.

As stated way up there at the top of this page, if you’re looking for something new to play and you’re tired of the same old games Casinos usually offer, you just may have a good old time playing Max Quest – Wrath of Ra.

Also remember, this is not like a card game. We do not know the mathematical house edge here, nor can we give you a “good strategy”. The only thing we can tell you to do is to jump in and have a great time!

While You’re Here, Why Not Also Take a Look at –