They say Baccarat was born in 1400s in Italy and then travelled to France where it became a favorite game of King Charles VIII and the nobility around him. Having become a big hit among the members of French aristocracy, the so-called Chemin de Fer remained an exclusive pastime of these privileged players. Though still perceived as a high-roller’s game, thanks to the internet Baccarat is now accessible to pretty much anyone who wants to give it a go. Add to that simplicity of gameplay and a super-low house edge (as far as casino games go) and it’s no wonder the number of fans is growing on daily basis. If you’re not one but want to see what all the fuss is about, read on to learn everything you need to know before placing the very first real money bet – including useful tips which should help increase your winning chances. Try them out risk-free by using demo option offered at most online gaming sites, and once you feel familiar enough with game rules, odds and payouts, see if Baccarat can be as lucrative as it’s fun to play. 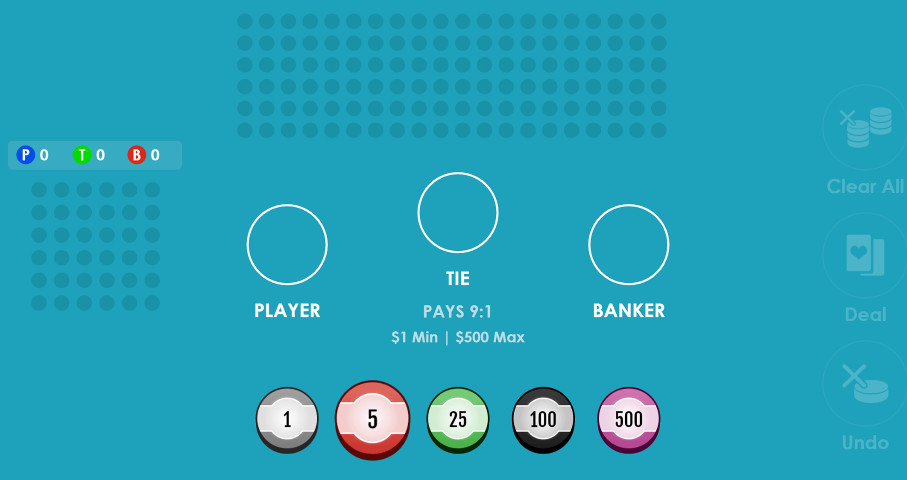 Not a ton to look at – The Average Baccarat Board

How To Play Online Baccarat

When you see terms “Player” and “Banker” you might assume the first refers to you and the other to the dealer. That’s not the case, though; Player and Banker are two hands one can bet on, thus predicting the winner. If the two are of same value, the outcome is yet another wagering option – a Tie.

Player bet pays even money, Banker bet normally pays even money minus 5% commission, and Tie deliver either 8:1 or 9:1, depending on where you play at. If hands Tie and you didn’t place a Tie bet, your wager is returned. As far as odds go, Banker wins (theoretically and in the long run) 45.86% of rounds, Player wins 44.62%, and Tie occurs in 9.52% of all rounds.

Be aware that Baccarat values cards unlike Blackjack or Poker. Cards 2 through 9 keep their face value, 10s and face cards count as zero and Aces as 1. Hand value is calculated by summing the value of participating cards and dropping the tens position, so that a sum of 15 translates into hand value of 5, and sum of 10 creates a hand of value 0. The highest total one can achieve is 9, which together with a hand value of 8 is considered a “natural” and automatically wins.

If James Bond loves Baccarat you should too! You can play or learn to play at Bovada, currently offering up to $500 on your first deposit! For reviews of our other, highly tested and trusted Casinos head over here.

The more you play the less confusing this will look.

Unlike Blackjack, Baccarat features relatively simple mechanics with a small number of betting options and therefore you’ll find fewer “winning strategies”. The use of quotation marks is meant to hint there are no, and probably never will be, rules which one can follow and be absolutely certain they’ll win.

There is, however, a little advice we can give based primarily on facts such as house edge and payouts.

Players tempted by 8:1 or 9:1 payouts should be aware of Tie house edge of as much as 14% and more. To put it simply, out of every 100 units wagered on Tie, you stand to lose 14+. Player / Banker bets might be able to deliver only even money but the edge on these two is low 1.24% and 1.06% respectively (when playing with 6 or 8 decks), which means your 100-unit investment risks a loss of 1.24 or 1.06 units. That’s why Baccarat connoisseurs will consistently advise to avoid making Tie bets, or at least not to place them on regular basis.

Should You Bet on Player or Banker? 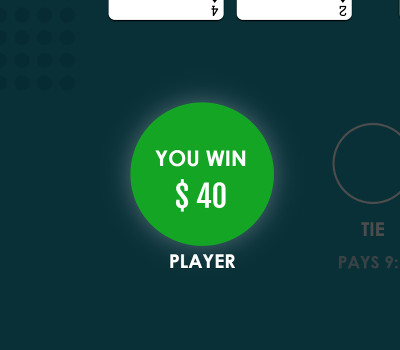 After a bit you’ll constantly see something like this scree.

Lower house edge on Banker bet combined with higher odds might imply that’s the one you should go for, but then you remember there is a 5% commission you’ll need to pay on all Banker wins and you’re no longer sure what to do. Let’s use an example to see what happens to your investment if you’re betting on the Banker.

Though, as already mentioned, there is no strategy to guarantee you’ll end with more cash than you originally showed up with, seasoned players would advise that you don’t break a run. What this means is, once you’ve chosen to bet on either the Banker or the Player and keep winning, don’t start switching back and forth.

To be more precise, the recommendation goes as follows: continue putting your money on the Banker bet until you lose, than wager once more on the same. If you experience another loss, start betting on the Player. In case of a Tie, simply pretend that round never happened and continue applying the same system as described above.

That’s about it! Another thing to keep in mind is that online Baccarat plays quite fast and, stressed by the need to react quickly, you may forget to monitor your balance. Next thing you know – you’re out of cash! As with any casino game, the smart thing to do is to decide how much you’re willing to lose and what’s the longest you want to stay glued to your computer or mobile screen. When either of these occur, walk away. Don’t set winning limits as in “I won’t budge until I’ve won so and so”. First, it may not happen during that particular gaming session, and second, if you happen to hit a winning streak, you may find it hard to stop. Next thing you know – all your winnings have disappeared and, once again, you’re out of cash! Winning tons of money is nice, but keep in mind that gambling should first and foremost be fun.