While the western part of the United States is one of the most populous areas of the country nowadays, it was not always this way. A great deal of the population moved there thanks to cheap land, followed up by the now world-famous gold rush in California.

Thousands descended onto the most western reaches of the United States, eager to get their cut of the action. And now, we join one of these pioneers, the hard-working Gus, as he wanders through a massive cave with his trusted pickax, clearing rocks and debris in hopes of finding a big chunk of gold.

Before truly getting started, we would like to point something out. We see that you may be into Gold Rush Gus. That’s awesome! He is a little different. As long as you’re into “different”, make sure you also check out The Wrath of Ra as well as this Cubee Slot Review!

There’s Gold in Them Thar Hills!

Gold Rush Gus is a slot developed in-house by Bovada Gaming and is exclusively available at their casinos. Sadly, there is no information on when the game was released, but if we had to hazard a guess, we would place around two to four years ago. The animations are super smooth, and just watching Gus run around, smashing his pickax into the ground to reveal new icons is immensely satisfying. The user interface has also seen a fair amount of work put into it.

The title’s vertical nature shows clearly it was designed with phones in mind, and while desktop users will not have any major problems, it does look super narrow on their monitors. Turning the spin button into a rotating pickaxe was a nice touch, too. We were unable to find any official information on this slot’s volatility, but our educated guess would put it at a medium variance.

While you’re here checking out slot machines, why not check out some of our honest casino reviews, starting with BigSpin Casino?

Caves, Caverns, and Citrines, Oh My!

Gold Rush Gus is played on a 5×3 playing field with 10 fixed pay lines. That means players cannot choose to turn some or all pay lines on and off in order to adjust their total bet. There is no official information on the game’s RTP, so we recommend caution if you decide to play it. Gamblers can only change their total bet, which can range between $0.20 up to $100 per spin, and that is standard for Bovada Gaming releases.

If you do not feel like constantly pressing the spin button, you can make use of the Autoplay function. Select the number of spins you want the title to play for you, and set your total bet, then lean back and watch the magic happen. You can end auto spins early by pressing the Spin button.

Payouts for all symbols are granted when you collect three or more identical icons in adjacent positions, going from left to right, following one of ten active pay lines. The cyan and red gemstones can award pay with only two symbols as part of a winning combination, instead of three.

The most valuable symbols are the cyan gemstone, followed by the red one, then the pink, orange, and green, then golden playing card royals A, K, and Q, and ending with silver playing card royals J, 10 and 9 as the least valuable icons. A crossed shovel and pickaxe are the free spins symbol, while a key icon will open a treasure chest which uncovers several bonuses. A bottle of booze is a Wild symbol and can substitute for everything except keys and free spins. These special icons do not have any cash prizes of their own. 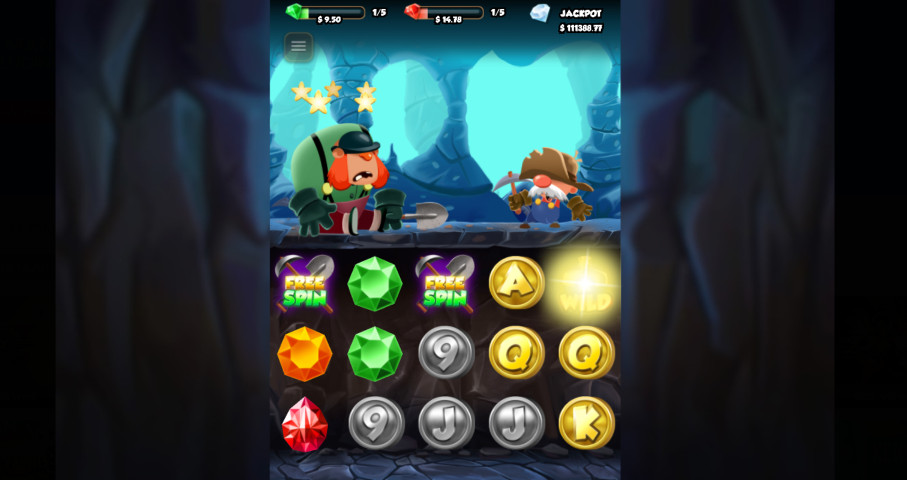 Just your average plain old everyday screenshot of what you would be getting into!

As long as you are here looking into the bonuses, why not check out this review for BigSpin Casino and see what kind of bonuses they currently have to offer?

During any non-winning spin, there is a chance the Lava Reels re-spin will fire. A lava jet burns all the symbols inside the reel, transforming them into magma blocks. When these blocks are broken, they reveal brand new icons, giving you a second chance at landing a win.

Treasure chests are triggered by collecting two key symbols on the first and third reel. The chest can contain the following prizes –
Progressive Jackpot: A blue-white diamond pays the progressive jackpot to the player. The contribution to it is paid by all gamblers.
Mini Jackpots: These are granted when you collect five green or five red gems from the treasure chest. These mini-jackpots tick up, but only contributions from your session make them increase, rather than being global like the progressive jackpot.
Bonus Game: You are taken to a separate screen where you have to collect as many coins as possible in a short amount of time. There are also boosters that players can use to help their chances. This is a skill-based special feature, so make sure you practice it!
Instant Win: A golden nugget appearing will grant an instant cash prize.

Collecting three, four or five Scatters rewards five, ten or fifteen free spins with a 2x, 3x or 4x multiplier, respectively. Wilds can only appear on the first, third and fifth reel during this bonus. It is possible to re-trigger the special feature, and it will grant more free spins. The multiplier stays the same, regardless of how many times the special feature is re-triggered.

Maybe not the greatest slot in the world, but certainly not the worst by far!
As with every other slot machine, there is a lot of money to win here and there is only one way to do so! Grab your pickaxe, grab your gold pan and get to work!